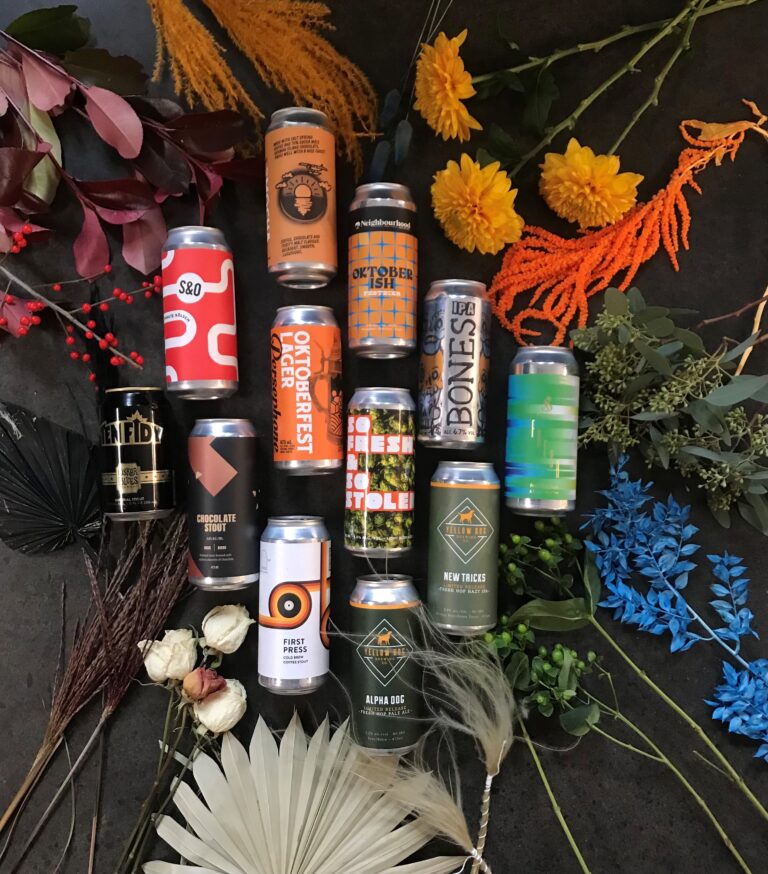 Welcome to Beer Mail 101!  For our first entry past the century mark we’re stepping back heavily into the swing of the season. While the days getting a whole lot shorter and wetter can be a bit of a downer, beer lovers rejoice at the swath of new cold weather beer styles that start to roll out. This package encompasses three trends that start to pop up at this time of year; Fresh Hops, Oktoberfest, and the emergence dark beers.  Just for good measure we threw in a somewhat spooky IPA.

The Fresh Hop beers in the package span across a few BC Breweries. The So Fresh So Stolen Lager from R&B and the Fresh Hopped Sour from Strathcona represent some more contemporary spins on the genre, Where as the two releases from Yellow Dog are already making a name for themselves as modern classics.

The next batch of brews falls heavily into the German tradition of brewing, and their annual celebration of Oktoberfest.  The style of beer brewed typically for the festival exist in a wide spectrum styles, but traditionally and amber malt-forward lagers.  This package contains two renditions on that style from some smaller BC breweries.  Persephone Brewing out of Gibsons is back with an annual entry, while Neighbourhood Brewing from Penticton takes their first crack at the can with their Oktoberish Lager.  The final entry into this category is a delicious Kolsch made in collaboration by Steel & Oak out of New Westminster, and Studio out of Burnaby.  Truly a beer the city of Koln could be proud of!

The colder months also beckon in the coming of dark beer, and there’s a healthy dose of those in here as well. There are a pair of adjuncted stouts in Moody Ales’ Chocolate Stout and Steel & Oak’s Cold Brew Coffee Stout.  Persephone also brings us a new spin on their Mocha Porter, this time on nitro in a can!  To round out the dark contingent, we have an old favourite from south of the border, sure to be a great nightcap on a stormy night, Oskar Blues TenFidy imperial stout.

As for the aforementioned spooky beer, we threw in the Bones Brewing IPA to get in the spirit of spook for Halloween this weekend.