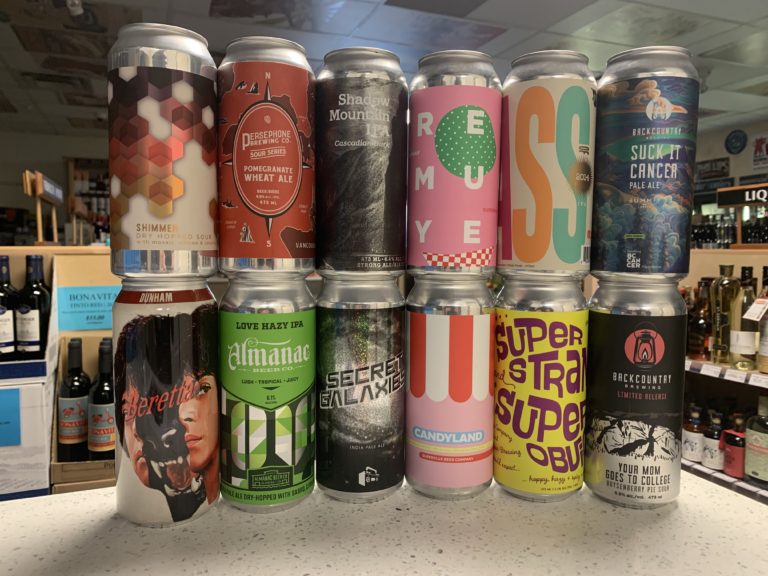 Our latest package contains some sweet, sour and hoppy as all heck.

Backcountry (Squamish, BC) has been releasing non-stop one-offs that leave you wanting more. Their latest releases in-store are the Suck It Cancer Pale Ale, which benefits the BC Cancer Foundation. Sporting an absolutely beautiful label, Suck It Cancer is a deliciously easy drinking juicy pale ale with a lightly dry, bitter finish. Great beer for a great cause.

Also featured is their Your Mom Goes To College (quoting the hilarious Kip from the movie Napoleon Dynamite) Boysenberry Pie Sour. A buttery sweet beer with a tart, sour finish.

A one, two punch and an added bonus with 3 Superflux beers. Their newest, Candyland, has just arrived. Designed to taste sweet, this beer is loaded with Raspberries and Vanilla to give it a cream soda-like character. Really refreshing and *fun*. Also featured is Pretty Much, Yeah, a collaboration with Portland, Oregon’s Gigantic Brewing. Packed full of hops and lactose, this hazy IPA is a deliciously creamy, cloudy, hop bomb! The third is a collaboration with Strange Fellows Brewing on Clark Drive. Super Strange Super Obvious is described as a “…. hoppy, hazy + spicy + can-conditioned too”. We tasted it to confirm that description.

Boombox continues their hop train of releases with Secret Galaxies IPA. Tons of bright, complex hop notes and a full-mouthfeel add up for an awesome beer. Worth seeking out – but now you don’t have to.

A couple beers from out-of-Province! Import beers are becoming few and far between. We’ve been seeing the BC beer industry thrive to the point where other market’s releases aren’t as much of a draw to the consumer. There are still a number of gems out there, and we’ve included a new package size for one of our store’s favourite breweries, Brasserie Dunham. 473ml can of Beretta Special Bitter, super easy drinking with a malty sweetness and a dry finish. California is known for their craft beer dominance and we’ve finally seen some non-barrel aged products from Almanac! Their Love Hazy IPA is killer. Tropical, Lush & Juicy.