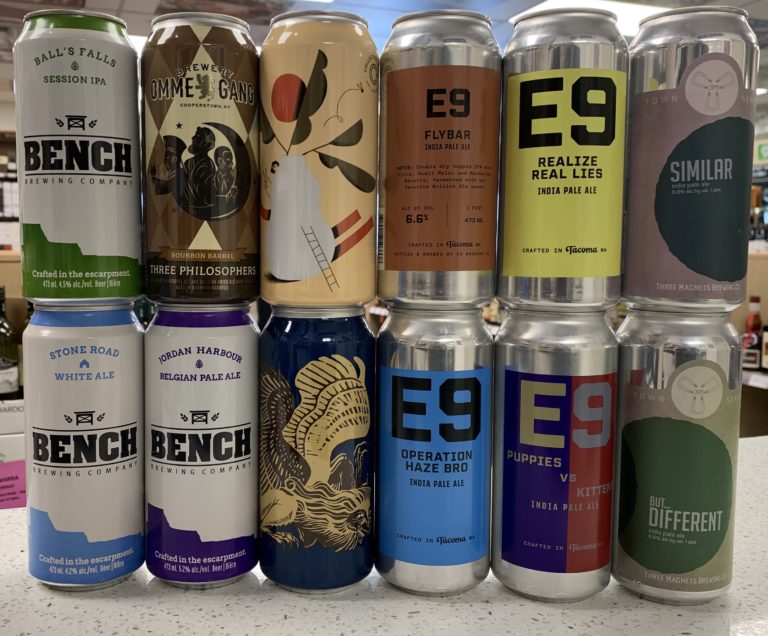 Welcome to Beer Mail #68! We’ve got zero BC beers in this pack.

We’ve filled this package with 473ml cans of goodness from Ontario and from south of us in Washington State including an insane beer from New York.

A funny story about that one… a couple customers of ours here in Victoria, BC founded Brewery Ommegang in Cooperstown, New York back in 1997. They’ve since sold the brewery to Duvel, but Ommegang quickly became one of the most sought after producers when we received them back in the early 2010’s, especially the Hennepin Saison and the Three Philosophers Quadrupel which has been blended with a Belgian Kriek w Cherries. The beer we’ve put in this package is this very beer, but Bourbon Barrel Aged and in a rare format, 473ml tall can!

Continuing with beers from the US, Engine House No. 9 in Tacoma, Washington, known for bottle conditioned farmhouse ales and barrel aged fruited sour beers has released a limited series of Hazy IPA‘s, and we’ve got all 4 coming your way.

Also packaged is Olympia, Washington’s 3 Magnets Brewing with 2 Hazy IPA’s that are Similar But… Different.

Now onto Ontario… Beamsville to be exact! Bench Brewing‘s 3 cans of refreshing styles to cleanse your palate from the heavy, unfiltered IPAs. A Belgian Pale Ale, a White Ale and a Session IPA.

We’re all familiar with Collective Arts now in BC, who have been consistently putting out incredible sour beers. One of our staff’s overall favourite beers, the Piña Colada Sour has loads of the juicy pineapple and hint of coconut on the sour finish. We’ve developed a new term in the shop amongst the staff, Certified Banger, which roughly translates into something like, “undeniably delicious” – and the Blueberry Cocoa Nib Sour was the first to be tagged with such a title.