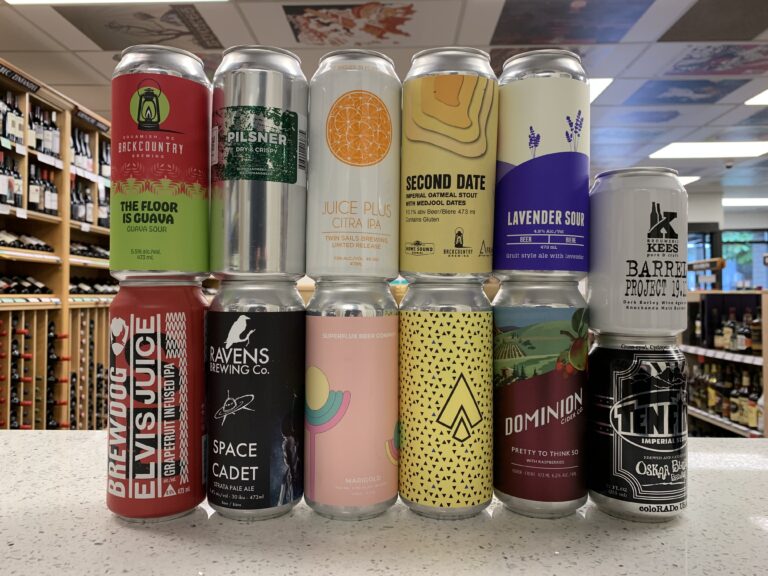 We’ve only got 15 packages available – they will be marked Out of Stock when we hit that number and you can expect another package within the next 2 weeks!

UPDATE: We have removed our 4pk Mix-n-Match deal, as we lowered all of our single can beer prices by an average of $0.70 per can, making it even cheaper than before!

Sours: The brand-spankin’ new Backcountry Floor is Guava Sour, the Sour IPA from Victoria’s Very Own Ile Sauvage, the ever-popular Lavender Sour from Moody Brewing which is now part of their core lineup!

Hazy: Superflux’s Marigold, Raven’s Space Cadet with Strata hops, Twin Sails Juice Plus is consistently delicious & even a beer from BrewDog Elvis Juice out of Scotland! We used to carry a ton of their little bottles but it’s great to see some fairly fresh cans from way across the pond!

Dark & STRONG!: Oskar Blues is finally back in stock! The Colorado staple is best known for Dale’s Pale Ale, but this Ten Fidy Imperial Stout has a big following. Kees you may remember from Beer Mail’s in the past, these Dutch maniacs produced this big barley wine aged in Knockando Malt Barrels. Howe Sound collaborated with A Frame Brewing & Backcountry on this massive Imperial Stout with Medjool Dates.

Lighter & Cider: Slow Hand Pilsner‘s a go-to 6pk but it’s now available in single tall cans! We’ve maybe had a Cider featured in packs previous – but it’s not common. This Raspberry Cider from Dominion was a home run last year and we’re excited to throw it in this package.