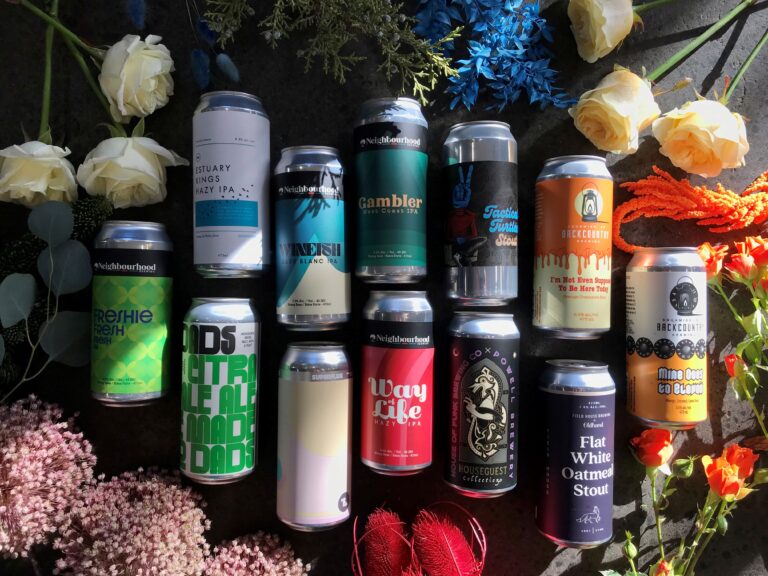 Welcome to Beer Mail 102: Winter Hop-apalooza!  With the weather getting colder it’s easy to get caught up in all of the delicious dark beer offerings that are rolling through the door, but fear not! This Beer Mail highlights the one thing that’s always in season out here on the West Coast, HOPS!!!  (there may be some dark beer in here too, but who’s counting…)

To kick things off we have a quartet of Hoppy treats from our friends in Penticton, Neighbourhood Brewing.  These guys have been making some killer beer as of late, and these are no exception.  The first two are new seasonal releases, Wineish and Freshie Fresh Fresh!  Wineish IPA uses locally grown Sauv Blanc grapes from Three Sisters Winery, and Freshie Fresh Fresh is their Fresh-hopped offering this year.  The other two are core offerings that have recently found their way into the tall can format for the first time.  These two, Gambler and Way of Life, showcase the diversity available in IPAs today, with Gambler being a hop-forward West Coast style, and Way of Life a more tropical, hazy East Coast Style.

Following in the East Coast tradition, we also have a fresh batch of Superflux Marigold hazy pale, as well as a brand new beer from Nanaimo’s own White Sails Brewing, Estuary Kings Hazy IPA!

It’s our pleasure to introduce 2DADS Brewing to the store, a brand new brewery contract brewing out of Victoria’s Caledonian Distillery.  Their first beer ever released to market is a Citra Hopped Pale Ale, which marries citrus and pine in a deliciously crushable package!  We look forward to seeing what else these guys come up with!

If you’re finding that you’re missing the warmer, longer days, you’re also in luck. Backcountry is here with a few different variations of liquid summer in a can.  This week we got two new Sour offerings from the Squamish masters-of-the-style.  “I’m Not Even Supposed To be Here Today” is an Orange Creamsicle Sour that pays homage to the Kevin Smith Cult Classic Clerks, while ” Mine Goes to Eleven” is a melange of mango, coconut, and lime sure to beat away the winter blues.

Not to be outdone, we also received a new Collab From Vancouver’s House of Funk and Powell Brewery.  This sour is made with Cascara, or the husks of the berries from the plat that produces coffee, and Ginger and brings the complexity in a big way!