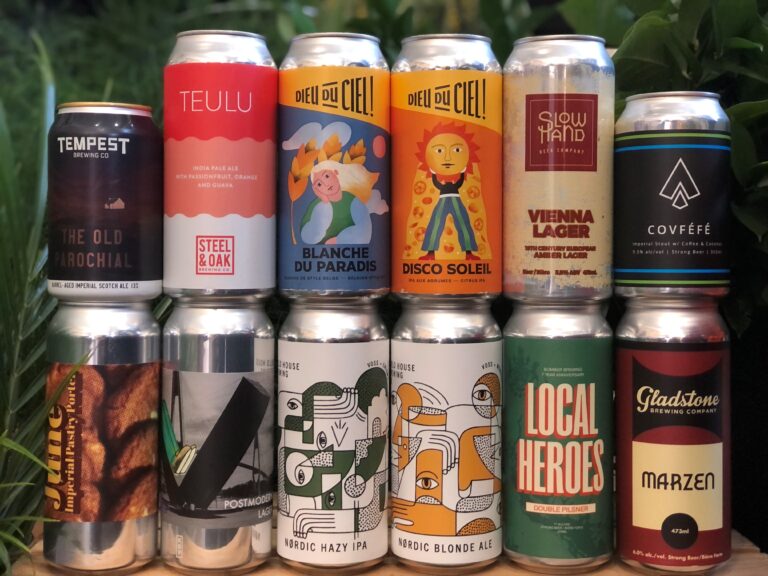 Ushering in the springtime season, we’ve put together a package that rejoices in all its varieties. Within you’ll find a pleasant melange of the bright lights and the stormy darks to capture those transitional climactic duels brewing outside.

Kicking it off with a bang, is Tempest Brewing! Hailing from Scotland, they’re world renowned for some truly decadent brews. Old Parochial is an imperial scotch ale aged in Speyside single-malt casks. Sitting at the absolutely massive 13%, this is something to consider on those rain-lashed nights.

Dieu du Ciel is continuing its charge into tall cans with two releases to delight the senses. Disco Soleil is a cloudy and citrus driven IPA infused with kumquats. Big summery orange vibes with a lingering hop bitterness. Blanche du Paradis is a refreshing and delicate Belgian-inspired wheat beer, offering a bouquet of citrus and spice floating atop toasted bread.

Field House Brewing is on a mission to explore all the ways you can integrate ancient yeasts, traditional grains, and new hops into beer. Coming out of their single-hop Kveik series are two new releases – a Nordic Blonde Ale , combining the lightly fruity Monroe hop with Voss Kveik yeast; and a Nordic Hazy IPA, with Voss Kveik, Enigma hops, and spelt malt. With quirky cubism art, and delicious fair-weather beer inside, this is proper picnic material.

Our friends from Another Beer Co made another voyage over to the island, bringing a plethora of curiosity-inducing concoctions. Balancing out the season, June is an imperial pastry porter, jammed full of their favorite cookies from Scarlitos Way, and Postmodern Lager is just that, a crushable light 4.4% ABV lager to drift off with in the sun.

Dreaming of the tropics? Steel & Oak’s new IPA Teulu is infused with passionfruit, orange, and guava to bring those Hawaiian POG fantasies to life.

Down here in the village, we’re suckers for a well-crafted lager. When the beaches are calling, they just can’t be beat. Slow Hand Brewing Co are undeniably masters of the style, and their new Vienna Lager is a testament to it.

As previously stated, we’re big fans of the crispy’s. So why not double up? Bomber Brewing hits that question out of the park with Local Heroes, a double dry-hopped pilsner loaded with 7 unique hops from BC growers. Expect massive levels of fresh hoppy goodness.

We’re starting to lose track of time here, days are speeding by. But Gladstone Brewing has got their calendar dialed. Marzen is both seasonally appropriate and supremely delicious. Toasty, rich, and elegant, it’s a German staple for a reason. Cheers to March!

Whilst known for their sours, Ile Sauvage makes some sneakily good saisons and stouts. Covfefe is a brand-new imperial stout w/ coffee and coconut! Bask in its warmth.