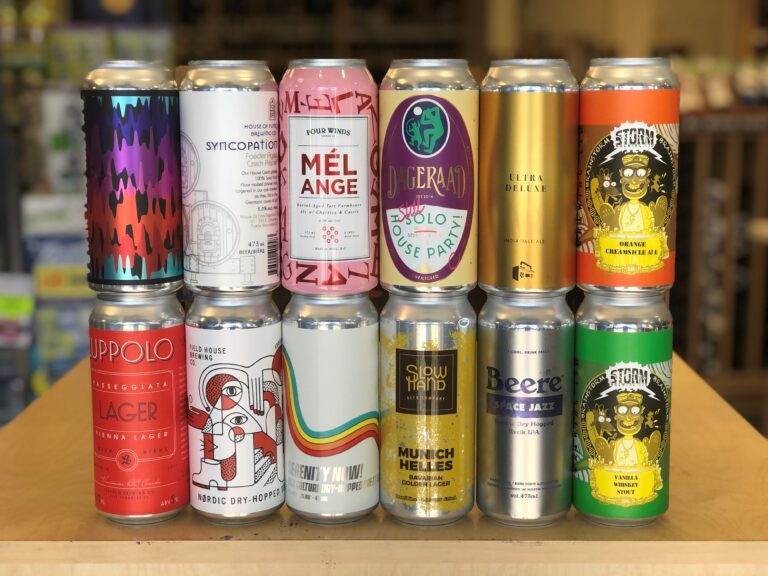 Jumping back into the rhythm of things with our latest collection of tasty treats to tantalize the senses, we’re bringing what’s hot to keep you cold.

One of our perennial favorites Power Tube from Moody Brewing is a hidden gem. Hitting all the big juicy tropical notes you’d expect from a hazy, the addition of lactose really rounds out and balances the flavours –  bringing with it a pleasant creamy body and mouthfeel.

Luppolo is well-known for flexing its mixed-culture muscles, but they’re steadfast becoming cognoscente’s of the crispy game as well. Passeggiata is a Vienna lager named after evening strolls, and what better to accompany that with than this.

Carrying on with the crispy theme, House of Funk has aged their House Czech pilsner in oak foeders. Syncopation is made with 100% Saaz hops, and it’s sure to be 100% delicious.

Field House continues their mission of ingredient exploration with their latest Nordic Dry-hopped Sour, combining rye malt, Ebbegarden Kveik yeast, and Topaz hops. Offering mouthwatering flavours of under-ripe peach, apricot, and lychee with a bit of hop spice to the finish, this brew is worthy of a Skol!

From the ever morphing and evolving Melange series, Four Winds newest rendition is loaded with cherries and cassis. Tart and enchanting with a gorgeous brambly kirsch-like flavor, the barrel-ageing elevates this to the next level.

Seeking a sense of calm? Join Powell in demanding it with Serenity Now! A mixed-culture dry-hopped Brett saison bursting with peppery tropical pineapple and mango notes, and heaps of barnyard hay and funk.

It’s been a year. One year since… the last Solo House Party! And to celebrate it’s return, they’ve ramped it up to an imperial. Indulge in the beautiful contradiction that an imperial session IPA poses, as you jam out in your home with this absolutely delectable brew.

Although devoid of sound, the absolute chaotic anarchy space is known for might best be scored with jazz. Enter Space Jazz . A double dry-hopped Kveik IPA from Beere Brewing. Citra and Galaxy hops on max thrusters.

And last but certainly not least, we’ve got Storm, keeping things weird and wonderful – just the way we like it. Orange Creamsicle bringing those popsicle vibes for the sunny days, and a Vanilla Whiskey Stout for those not so dry nights.