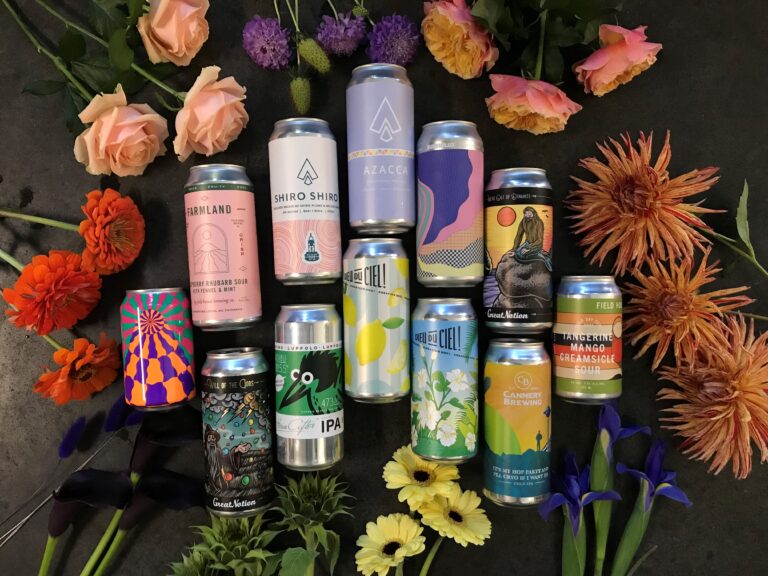 We’re fast approaching the end of the summer season, but worry not – beermail is back with some absolute crackers to keep you in the sunshine state of mind.

From the juggernauts at Field House in Abbotsford, a Raspberry Rhubarb Sour w/ fennel & mint, and a Tangerine Mango Creamsicle Sour. A pleasant little coupling of fruity and crisp, and sweet and delectable. Hometown heroes Ile Sauvage are bringing an Azacca dry-hopped Pale Ale and a Shiro Shiro Berliner Weisse (made with shiro plums & nelson sauvin) to the table. Expect a pillowy, stonefruit-led profile from the former; and a tart, dry, and aromatic character from the latter.

Further on out east in the cute Mile End neighborhood of Montreal comes a duo from Dieu du Ciel. A white hibiscus hoppy witbier, aptly named Hibiscus Blanc, is a floral and vinous aromatic gem with whispers of Sauvignon Blanc. Limonade Poivree is the ultra refreshing counterpart to the previous – a low-abv wheat ale infused with lemon, black pepper, and lemongrass.

There seems to be a new trend in the craft world, and it’s not getting any colder. We’ve got a side-by-side for you to compare and contrast these two Cold IPA‘s. From Luppolo on Venables in Vancouver comes Heron After, an elegant blend of a clean crisp lager complimented by the hop profile of a West Coast IPA. From the folks at Cannery in Penticton, It’s My Hop Party and I’ll Cryo If I Want To incorporates a newly innovated blend of hop compounds from Yakima Chief into the cold IPA format to supercharge the aromatics.

What’s a beermail without Superflux? Fresh off the press is Jellystone, unsurprisingly an IPA and unsurprisingly delicious. Brewed with Citra, Mosaic, and 2 new blends of Cryo hops – it’s tropical, fruity, and sure to please.

Portland is home to some of the legends and frontrunners of the craft beer scene. Hailing from there, Great Notion is on a mission to brew some of the most creative expressions of what beer can be. Keeping it tame is Will of the Gods, a saison with aged dry hops. Funky and effervescent, it’s a beast of a saison. Keeping it absurd is We’re Out of Dynamite, an imperial stout with the additions of coconut, pineapple, and passionfruit. A dark tropical trip.

Last, but never least, are the masters of the aforementioned mission. Omnipollo, originally out of Sweden, push boundaries like no other. Pleroma is a gooseberry, raspberry, creme brulee sour. Yes, you read that right, and it’s magic.